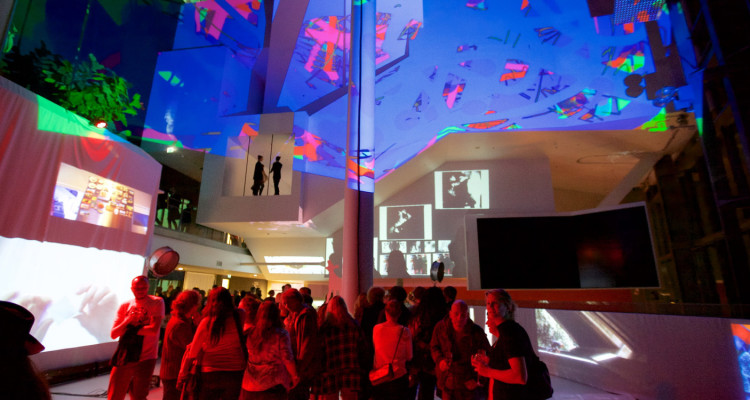 In the picture: Bring Your Own Beamer festival in Utrecht, a photo by Sebastiaan ter Burg, CC BY 2.0

The Netherlands have been one of the first European countries to take up the challenge of open data and open content for the cultural sector, building a number of interesting collaboration projects in the last years. In Wikimuseums we will have the chance to host one of the major players working in this field in the Dutch context: Open Cultuur Data, a network of cultural professionals, developers, designers, copyright specialists and open data experts, working on cultural heritage and encouraging the development of valuable cultural applications.

Started in 2011 by a joint initiative of three institutions (Kennisland, Open State Foundation and the Netherlands Institute for Sound and Vision), since then it has organised workshops, presentations and masterclasses, supporting cultural institutions in opening up their datasets, also awarding through a competition the best applications made with cultural open data. Maarten Brinkerink from the Netherlands Institute for Sound and Vision will join us in Naples to tell us more about this approach and how it changed the perspective of the Dutch cultural sector. In the meantime, we asked him three short question to start getting familiar with the story of Open Cultuur Data.

Q: What about the birth of OCD? How come did you start working together and which were your objectives at the beginning?

A: It started as a conversation between cultural heritage professionals around the first edition of Apps for NL, a competition that was originally organized to stimulate the reuse of open government data. We thought it would be good to also position open cultural data in this competition, so see what app developers would reuse our collections for. The network Open Cultuur Data was soon born and consisted of front-runners in the sector who wanted to quickly help each other with the opening of their data and the promotion of these sets to the participants of the Apps for NL contest. Funny fact: The winner of the competition, was actually an app based on cultural data, and not government data. So in some sense we succesfully hacked cultural heritage into the open data movement that was already happening around open government data.

Q: How did you manage to build a relation with the cultural sector in the Netherlands? Were they skeptical at the beginning?

A: Since I’m personally from a cultural heritage organisation, the relations already existed. Most of the first institutions that joined the Open Cultuur Data network, were also part of an earlier informal network initiative that discussed digital developments in the cultural heritage field in general. Open data was such a complex, but also promising topic, that it resulted in a initiative on its own.

Q: After these five years which accomplishment are you most proud of and why?

A: I would like to name two things: On the one hand we’ve been able to build an effective set of activities for knowledge building and transfer about open data in the cultural heritage field. The shared learnings of the network are captured and transfered in the form of masterclasses and a freely available reader. This covers things like copyright, technology and policy. The second thing is that we’ve been able to evidence the added value of opening cultural heritage for reuse with the research we’ve done on the impact of Dutch cultural heritage through Wikimedia projects. For more information you can read this article.

The impact of open data projects for the cultural sector will be a major theme we will try to face during our conference on friday, May 6th in Museo Pignatelli, also thanks to Maarten’s presentation. Are you curious to know more or want to contribute to the discussion? Subscriptions are still open on wikimuseums.eventbrite.it: hope to see you there!