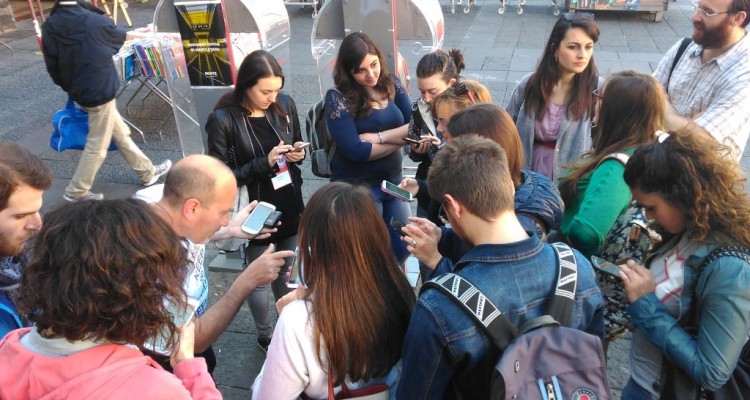 From the story of the first day of  Wikimuseums, you will have understood that it’s not the kind of event where participants just sit on their hands and listen to what’s being said … this was also confirmed during the second day!

From the first few hours in the morning, even before the conference at Villa Pignatelli began, the participants of the marathon were moving around the historical centre of Naples, led by Alessandro Palmas and Saverio Giulio Malatesta. Objective: to bring the QRcode connected to Wikipedia closer to some of the places that had been chosen to work on on the previous day and georeference them on Openstreetmap.

In the meantime, the hall in Museo Pignatelli was filling up with a hyperactive audience that at one point during the conference actually made the hashtag #Wikimuseums skyrocket, reaching the first place on the list of trending topics on Twitter. From Simone Cortesi to Maarten Brinkerink, from Peter Gorgels to Paolo Verri, there was no intervention, no matter how technical, that didn’t spark questions and curiosity.

After the welcome from Mariella Utili, the director of the Polo museale della Campania, and greetings from Joost Klarenbeek, Deputy Ambassador of the Netherlands, Federico Borreani from BAM! introduced the day and the reasons that led him to organise Wikimuseums: speaking about methods and cases on how to reduce the distance between citizens and cultural heritage through digital means and give citizens the opportunity get involved giving cultural institutions new ways to communicate.

Then came the moment of the most awaited guest: Peter Gorgels from the Rijksmuseum opened the second session, Popular Museums: two possible models. The Rijksstudio project won us over, showing us how the most famous museum in Amsterdam managed to take a chance at the disposal of creative and passionate people, to reprocess and reinterpret his collection. Because a public collection is already a collection that belongs to everyone: Rijksstudio has done nothing but make it more open for everyone. Even the Rijksstudio Awards are going in this direction!

The ball is finally returned to Italy’s court with a final project explained by Rossella Tarantino and Paolo Verri, during the guide of Matera 2019 European Capital of Culture. Starting from the idea of a demo-ethno-anthropological museum, in Matera they are working to create a platform that makes all the historical, artistic and anthropological testimonies of Matera and Basilicata avilable online, and free from rights. This will enable citizens and users from all over the world to understand and interact with the heritage.

After the lunch break, back to work: it’s time for the workshop. After the introduction by Claudio Forziati from Wikimedia, thirty Italian museum professionals armed with their Wikipedia accounts faced an afternoon of editing dedicated to Villa Pignatelli, its collection and characters that have marked its history. Our untouchable Wikimedian tutors, assisted by Francesca Russo from the Polo museale della Campania, for the part regarding content, helped the participants to juggle wikilinks, red links and bibliographies. Among those present, many institutions belonging to the Polo, such as the Palazzo Reale (armed with a real team!) and the Certosa di San Martino, other Neapolitan museums such as Madre and the Fondazione Morra Greco, but also visitors from further away, like the Gallerie degli Uffizi.

A long afternoon of experimenting ended with a goodbye aperitif: not goodbye as such, but see you later! The two work groups, especially the group of students involved in our marathon, have in fact already agreed to meet again soon to continue to curate the pages they created and geolocated online. You will be hearing about them very soon …

You can take a look at all the pictures on the Wikimuseums Facebook group: and while you are there make sure to subscribe to stay up to date!