When exhibits emerge from museums: what we learned during Museo Fuori!

By Elena16 November 2021No Comments

Museo Fuori! is the pandemic-adapted version of Museomix, the marathon project that has been taking over Italian museums since 2016 in order to come up with innovative prototypes for promoting their collections.

This necessary adaptation could not fail to take into account the new ways museums were used 2020/21, when closures forced organisations to exert themselves by thinking about the museum beyond the museum spaces. This year’s event therefore wanted to embrace and in some ways accelerate a process that had already begun (and that, in some cases, had already become established: all the museums have accepted the truly indispensable role played by digital technology).

However, thanks to the Ritorno al Futuro project supported by the Compagnia di San Paolo’s CIVICA call for proposals, Museo Fuori! also wanted to take it a step further by combining this new path being followed by museums with the need to reach a complex and diverse society made up of a multitude of people, often with very different and distant origins, bearers of intangible heritages that demand even more mediation and synthesis with the tangible heritages safeguarded by museums. BAM! and the Museomix Italia community were supported in rethinking the format by partners accustomed to working along these lines in Turin and Genoa: the Generazione Ponte and Nuovi Profili associations.

This year in Turin, in the space of just ten days, makers, designers, museum operators, programmers and cultural mediators were involved in creating three projects that took all this into account, starting out in two museums in the city: the Museo Nazionale del Risorgimento Italiano and the Fondazione Accorsi-Ometto.

The Museo Fuori! marathon concluded on Sunday 24 October with the public presentation of the prototypes in the museum courtyards. Here’s a brief presentation:

“Sobremesa”: food as a key to sharing.

With its “Sobremesa” installation, team 1 asked the public to “sit at the table” and share their recipes, thereby encouraging people of different origins to share their experiences and traditions. The wooden installation consists of a table with two side walls. One wall is designed to inspire users through postcards that may contain a series of recipes from all over the world or interesting objects from the Accorsi-Ometto collection (crockery, ceramics, teapots, cups, etc.); on the other wall, there is a world map to which visitors can pin their own recipe or a thought linked to food. “Sobremesa” is an untranslatable word, an expression shared by Spanish and Portuguese. It indicates that magical lapse of time spent sitting at the table chatting with people you’ve just finished eating with. 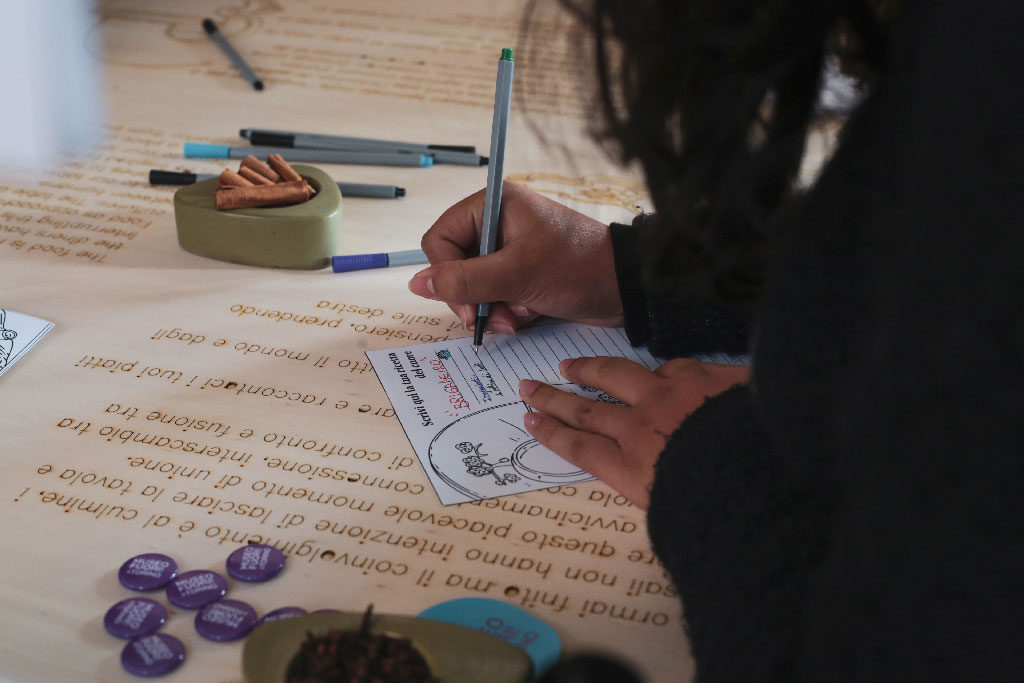 The second team created a board game called “Musei con delitto”, a fun way of learning about the collections housed in the museums through the characters and objects that populate them, but above all a practical way of bringing them into everyone’s homes! The rules are very similar to the super-popular “Cluedo”. Players have to investigate a crime involving famous names from the Italian Risorgimento (Mazzini, Cavour, Queen Victoria, etc.), while the potential weapons are objects from the Fondazione Accorsi-Ometto. The playing cards provide interesting facts about the characters and objects. For example, did you know about the existence of the lectern-sabre or the asparagus-shaped tobacco tin? 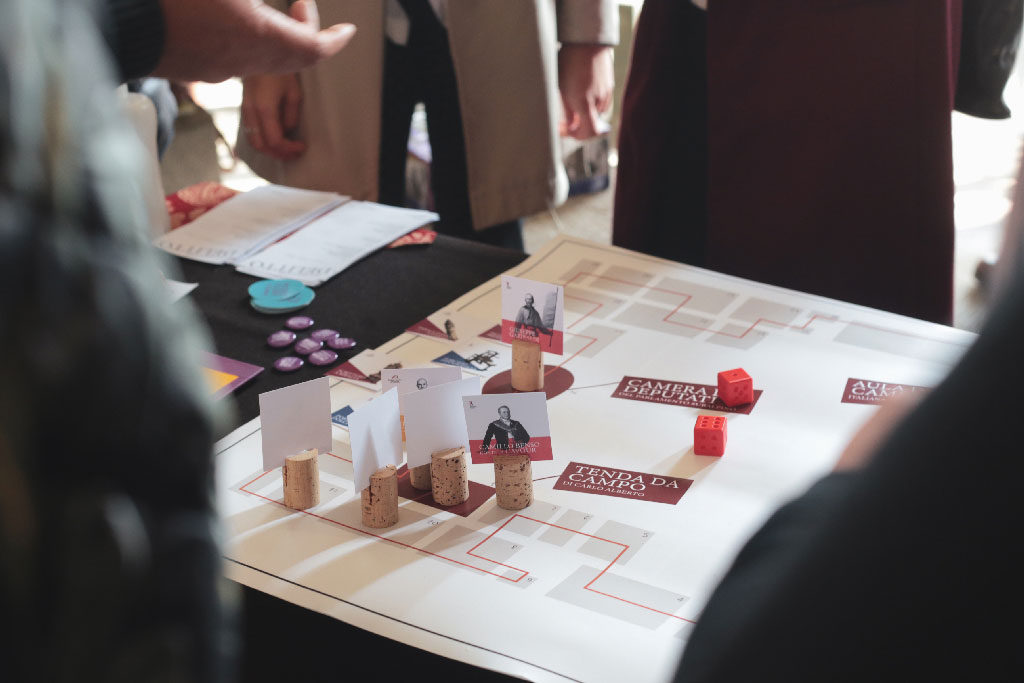 The mixers wanted to revisit Italian Risorgimento heroes from a present-day perspective, extracting them from their original contexts (the paintings housed in the Museo del Risorgimento) and presenting them on a wooden tower at the museum entrance. The prototype’s three panels feature Cavour, Victor Emmanuel II and Maria Theresa, but with their faces replaced by a mirror that reflects the viewer’s face, thereby helping them to identify with the great figures of the Risorgimento. The three characters were placed against a fuchsia, fluorescent green and white background, in a reinterpretation of the Italian flag. The mirrors, and therefore the figures themselves, were positioned at different heights so that the tower could be enjoyed by different people, without excluding different height categories. 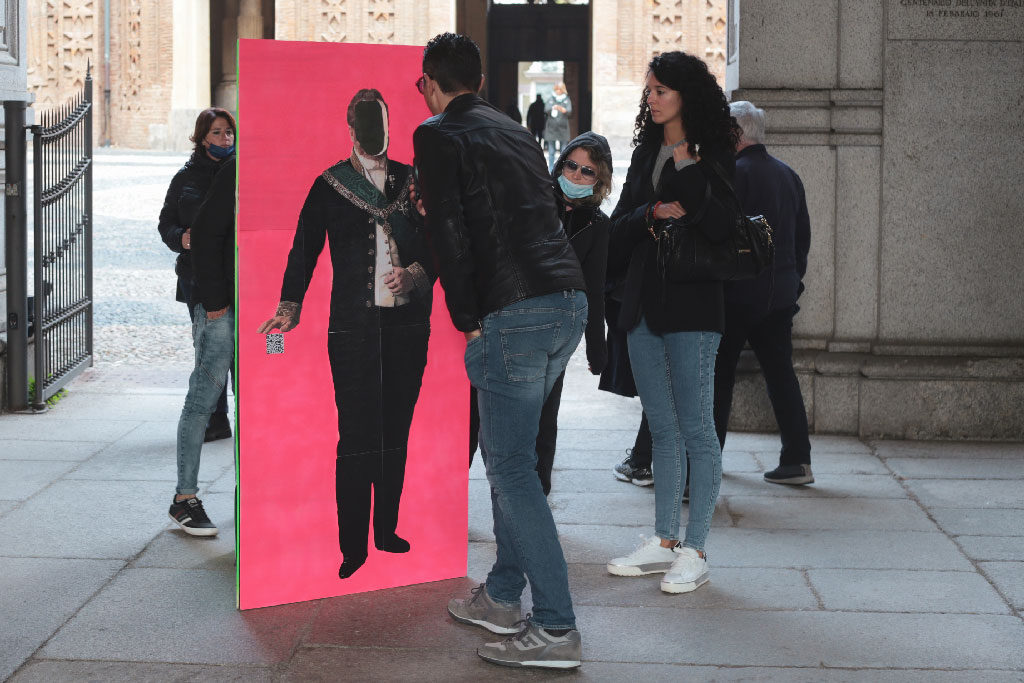 Taking the collections outside to foster new dialogues with the non-audience.

First and foremost, the projects developed by the teams had to consider that the users at whom they were targeted might not be museum visitors, that is to say those who choose to “encounter” the collection. Vice versa, the prototypes placed the collection contents right at the heart of a new encounter situation: one that was completely unpredictable and authentic. These new users, who casually pass each other outside the museum, are ordinary citizens – to recall one of the grounds of the game “we’re all ordinary, we’re all heroes” – people who might casually stroll past the museum because they’re out walking with their families on a Sunday afternoon.

This gives rise to an initial reflection: when an object enters a museum, it immediately acquires a further level of meaning due to its being part of a collection, and consequently an object of study and observation. Unfortunately, this dimension sometimes overtakes the work itself, overshadowing its essence. The Museo Fuori! operation somehow reverses the path, destabilising this dynamic, since here the object emerges from the museum once again, putting the collection dimension in the background and highlighting the function dimension. This mechanism is particularly evident in the “Sobremesa” and “Musei con delitto” prototypes, e.g. the ones linked to the Fondazione Accorsi-Ometto’s collection of antiques, furniture, tapestries, silverware and ceramics. These objects have more evident functions: even a finely decorated plate from the late 18th century can have food placed on it or be thrown, but still remains first and foremost a plate!

The viewer is not asked to interact with the work by relying on what he or she may already know or may have learned in the previous rooms, but is instead asked to approach it with his or her own baggage of experience, questioning the work as regards what it can tell/recall rather than what it may mean. The Accorsi-Ometto collections immediately become accessible to everyone, potentially even intriguing people from distant cultures. The prototypes stimulate us and encourage us to learn more (QR codes have been a consistent feature in all the proposals, while entering the museum is the next step). It is therefore not a question of removing the works from their current context – the museum – but rather of starting from the origins of the works themselves and then asking the user to integrate them into the museum dimension.

Reaching potential visitors in the places where they spend time.

Another peculiar aspect of these prototypes is their capacity to function in contexts that are physically distant from the museum. A board game therefore doesn’t have to be limited to a piece of merchandising, but can also become the central focus of a social activity at the Case di Quartiere in Turin (a destination proposed by the creators of “Musei con Delitto” themselves). And here the imagination runs wild: from schools to community centres for the elderly, from shelters to libraries. It can be played anywhere!

In the same way, anyone with “Herozero” can engage with characters from the Risorgimento and discover a cross-cutting aspect of a museum that tells the story of fundamental conquests of freedom that will never go out of fashion. It may be a game, an incitement that lasts a few seconds and is shared with friends on social media, or it may inspire reflection, personal research and further study, perhaps climbing the steps that lead to the magnificent interiors of the museum.

Museo Fuori! Let’s do it again.

We’re drawing to a close, with the enthusiasm of the participants still etched on our minds and a new Museomix Italia local community in Turin, which has led to a number of insights.

Having established the importance of working on museums as places, to be opened up to the public as much as possible (perhaps with new activities such as Zumba or performances), Museo Fuori! provided proof that it is equally important to consider the museum beyond its existence as an entity and place unto itself. The museum can be perceived as a source of wonders, which safeguards stories and knowledge able to flood our cities and foster dialogue between different cultures.

We can’t wait to plan new marathons inside and outside museums, ensuring that they carry on exploring their potential and their essence. We’ll continue to help museums find their way through these changing times.