This is the start of the first in a series of ten Zoom meetings designed to guide cultural and creative enterprises through European planning. In fact, these words are the answers given by the participants to the first question asked of them: What is the first word that comes to your mind when we say European funds?

Find your way in EU is a mentoring course designed to bridge those gaps that are still all too common among culture professionals across Europe. Made possible by the Comune di Bologna, as the final stage of the MED Chebac European project (funded thanks to the Interreg Med programme and coordinated by ART-ER), the course is targeted at the cultural organisations selected by Chebec, but also at the network of Incredibol tender winners and organisations supported by the Comune di Bologna. 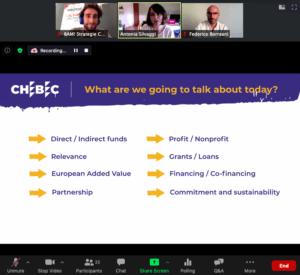 Participants in this initial introductory meeting on the complex issue of European funds were guided by Federico Borreani for BAM! Strategie Culturali and Antonia Silvaggi for MeltingPro. Both began with the personal experience of their own organisations, demonstrating how numerous different and highly strategic approaches can be taken to European planning.

The second part of the webinar explored certain key words in European jargon, namely those terms able to make participants grasp the fundamental concepts to be considered when deciding to plan culture together with the European Union. One example was exploring what the EU means by “relevance”, which does not only regard a cultural project’s capacity to resolve a specific problem, but first and foremost the coherence between the objectives of the proposed project and the EU’s objectives, such as to make its support essential. Another issue examined was the importance of an effective and diverse partnership, able to boost the sense of cooperation between different European countries!

The meetings will continue until October 2020 and will involve various professional experts in European planning such as Alessia Rebeggiani from InEuropa, Patrizia Braga and Federica Pesce from MeltingPro and of course the BAM! team. Videos of the meetings will be available to everyone on the Comune di Bologna’s YouTube channel, while BAM! is already working on the next Zoom meetings.