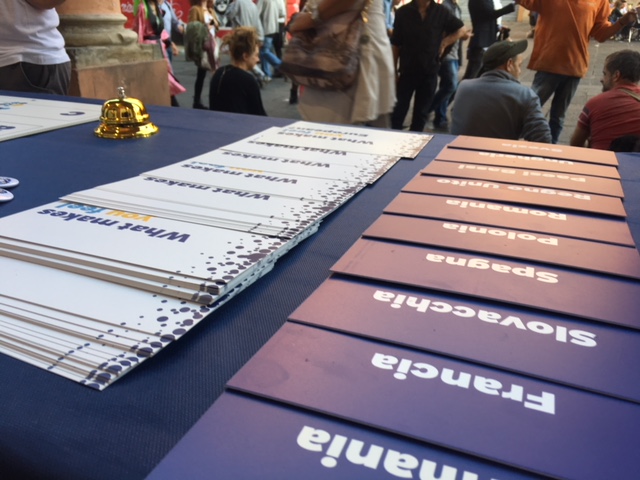 The European Horizon 2020 project, for which we are the Dissemination and Communication Leader, was in attendance at the European Researchers’ Night in Bologna organised by the SOCIETY project.

The European Researchers’ Night is an initiative promoted by the European Commission. It takes place every year, in late September, and involves thousands of researchers and research institutes from all over Europe. Events were held in more than 300 cities in 2018. It offers researchers a unique opportunity to meet citizens in an informal setting and make their work more accessible to people who are not familiar with research. Live scientific experiments and demonstrations, exhibitions and guided tours, conferences and seminars, shows, concerts and artistic performances are just some of the activities involved.

SOCIETY (How do you spell RESEARCH? SOCIETY – Science, histOry, Culture, musIc, Environment, arT, technologY) brought the Researchers’ Night to the city of Bologna, as well as to Cesena, Forlì and Predappio, Ravenna and Rimini. The project, funded by the European Commission as part of the Marie Sklodowska-Curie activities, is coordinated by CINECA and involves the Università di Bologna among the other partners. What are the relationships between science, culture and society? What impact does research have on our everyday life? These are the central themes of the evening, on which the events are based.

Here at BAM! we worked alongside the researchers in the PERCEIVE Project, which aims to study different European countries and their sense of belonging to the European Union. The project’s ultimate aim is to provide tangible recommendations on how to improve the implementation of European regional policies and make European citizens more aware of how they benefit from them.

During the Researchers’ Night we involved the public in a series of activities designed to debunk some fake news and foster better knowledge of European citizens’ perception of the EU, states’ effective expenditure and their income. We used quizzes and maps to play with the data, either in teams or individually. The result and the level of engagement were surprising! We managed to generate interest by starting with simple questions such as “place these states in order from the most Europeanist to the least Europeanist.”

PERCEIVE is organising a series of events for this autumn. We’ll update you soon on the project social media channels (Facebook, Twitter and LinkedIn) and on the BAM! channels.