By Elena19 November 2021No Comments

A day in Venice to learn about communication and public engagement strategies with staff from the Gallerie dell’Accademia, Collezione Peggy Guggenheim and Palazzo Grassi/Punta della Dogana! 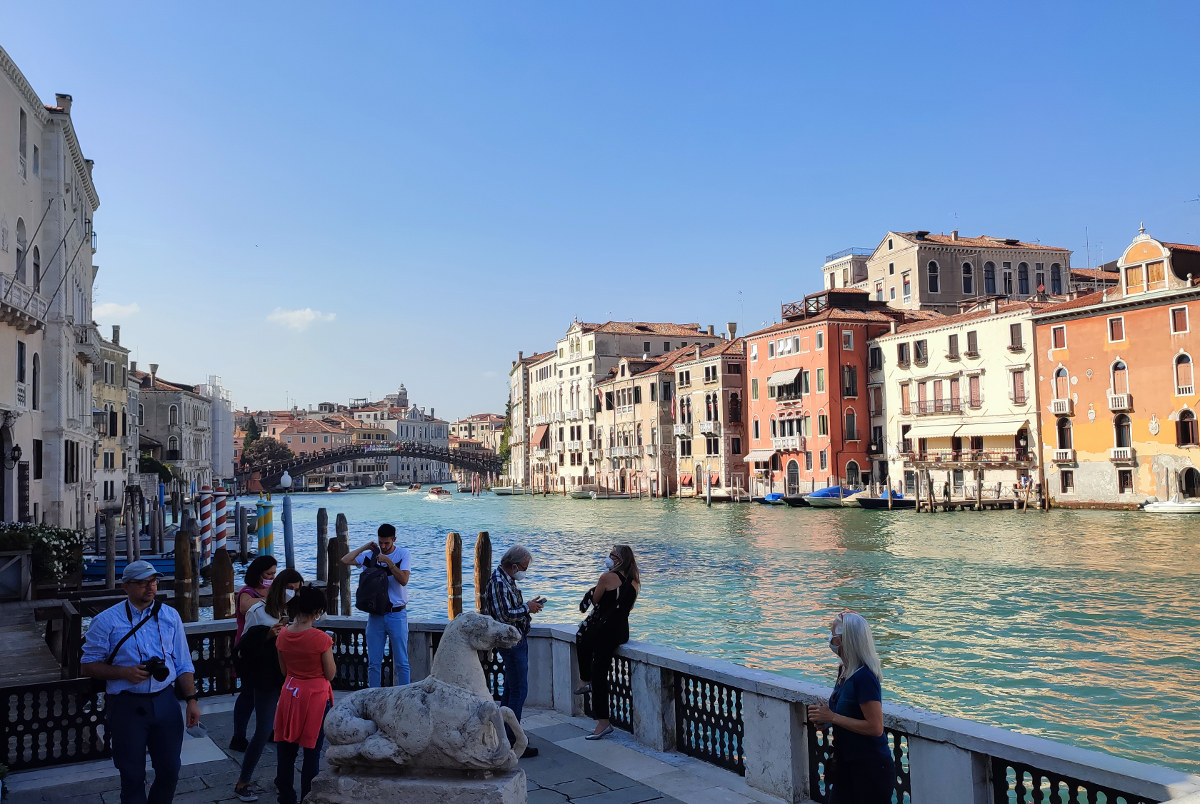 BAM! created an intensive training course on digital strategy, content creation, social media management and monitoring for the Fondazione Ducati. This two-month course comprised more than thirty lessons and concluded with a group day trip devoted to learning about other museum institutions, meeting with them in order to make comparisons and draw inspiration from them in different ways, with a specific focus on communication and education.

Out of the various options proposed by BAM!, the staff at the Fondazione Ducati chose Venice, a city that offers the possibility of experiencing a relatively new network of museum institutions: Dorsoduro Museum Mile, inspired by the mile of New York museums on Fifth Avenue.

The day spent in the lagoon city with our students from the Fondazione Ducati and the cultural institutions that hosted us was extremely enjoyable, packed with ideas and inspiration. We therefore felt it would be worthwhile featuring some of the highlights … Follow us through the calli and sotoporteghi, palazzo after palazzo!

Venice has its own Museum Mile

This itinerary links four institutions based in Dorsoduro, embracing eight centuries of history and art thanks to their different areas of specialisation. The museums reveal a close relationship with the city, albeit without renouncing the international scope of their collections and exhibitions.

The Dorsoduro Museum Mile is made up of the Gallerie dell’Accademia, the Galleria di Palazzo Cini, the Collezione Peggy Guggenheim and Palazzo Grassi – Punta della Dogana. After paying full price to enter the first museum (any one of the four), visitors can then purchase discounted tickets to visit the other three within a seven-day period.

Our day began at the Gallerie dell’Accademia, the first venue we come to when walking from Venezia Santa Lucia station, but also the institution with the oldest collection, so that we can explore the collections in chronological order.

After entering through the wonderful new ticket office and bookshop, we were welcomed by the director Giulio Manieri Elia and by Dr Michele Tavola, curator of the nineteenth and twentieth-century art sections and responsible for contemporary art projects.

Learning about the city starting from the Gallerie dell’Accademia 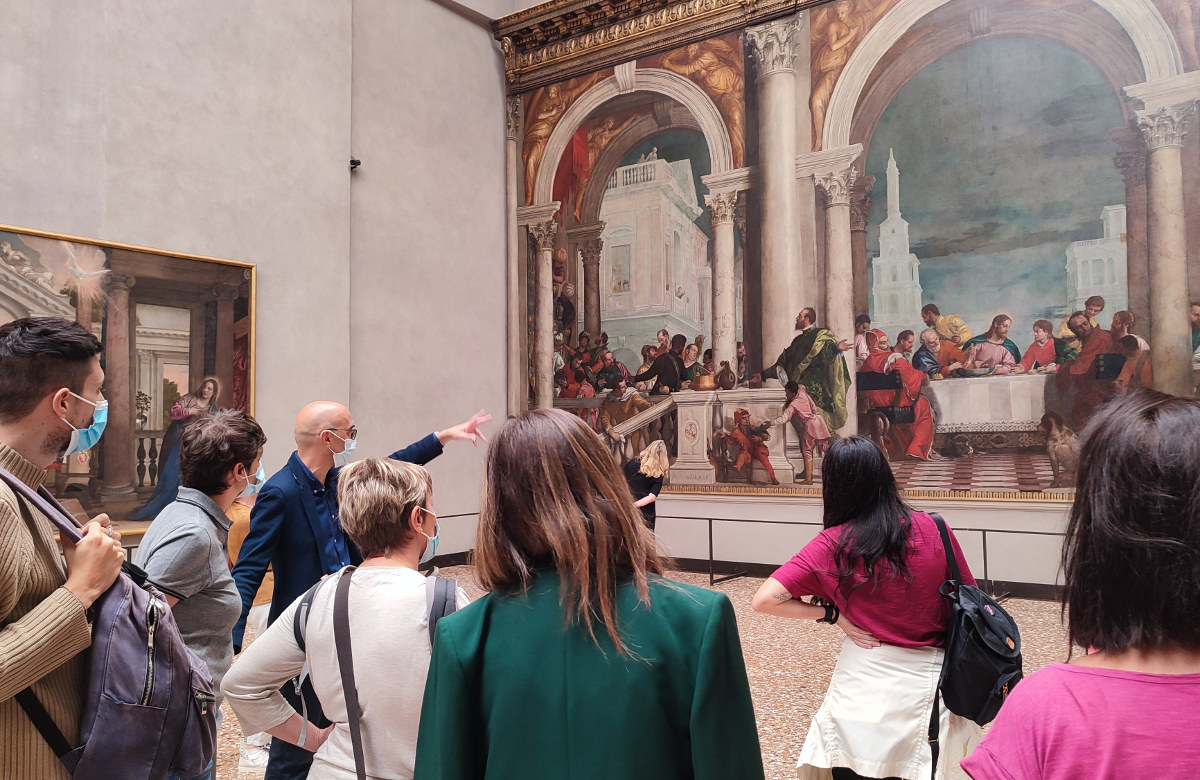 Together with the director, we looked back at the history of the Accademia, one of the richest and most prestigious in Italy in the sixteenth century, all the way through to the ambitious interior renovation project.

Why this dive into the past? It was immediately apparent that the desire to convey the history of the Accademia and its link with the city to us, and to visitors in general, is one of the key elements on which the Gallerie’s communication is based. Indeed, promoting the collection means being able to tell the city’s history through painting: “learning about the city starting from the Gallerie”. And here we have the first point of contact and the first similarity with Ducati, whose corporate mission includes the founding principle of promoting history, despite the fact that its core business is far removed from the artistic sphere.

In recent years, the Gallerie’s efforts have been concentrated on expansion, the reorganisation of the collection and the improvement of the services offered, mainly thanks to its extensive relationships with foundations and companies.

The Gallerie dell’Accademia are the only state-run institution in the network, meaning that it is managed in a different way to the other organisations and has different access to funding. This is why being part of a network is an important aspect. Constructing and cultivating relations not just with businesses, but with other museums and institutions, is one of the key elements of the Dorsoduro Museum Mile, which puts itself forward as a museum/cultural network.

After the director’s historical excursus, which gave us a better understanding of the Gallerie’s identity, we moved inside the museum. Walking through the first rooms, where Michele Tavola told us about the latest major restoration work, we came to the new exhibition layout devoted to seventeenth and eighteenth-century Venetian painting. “Le Gallerie che non ti aspetti” is the recently inaugurated exhibition project, which aims to promote this section of seventeenth- and eighteenth-century art.

Works never exhibited before have been brought out of the storerooms and have emerged after major restoration projects, leaving visitors and social media users open-mouthed. This was a project that we noticed even before entering because it was well communicated outside the Gallerie through large, eye-catching posters.

At Palazzo Venier dei Leoni: innovations in the Guggenheim collection 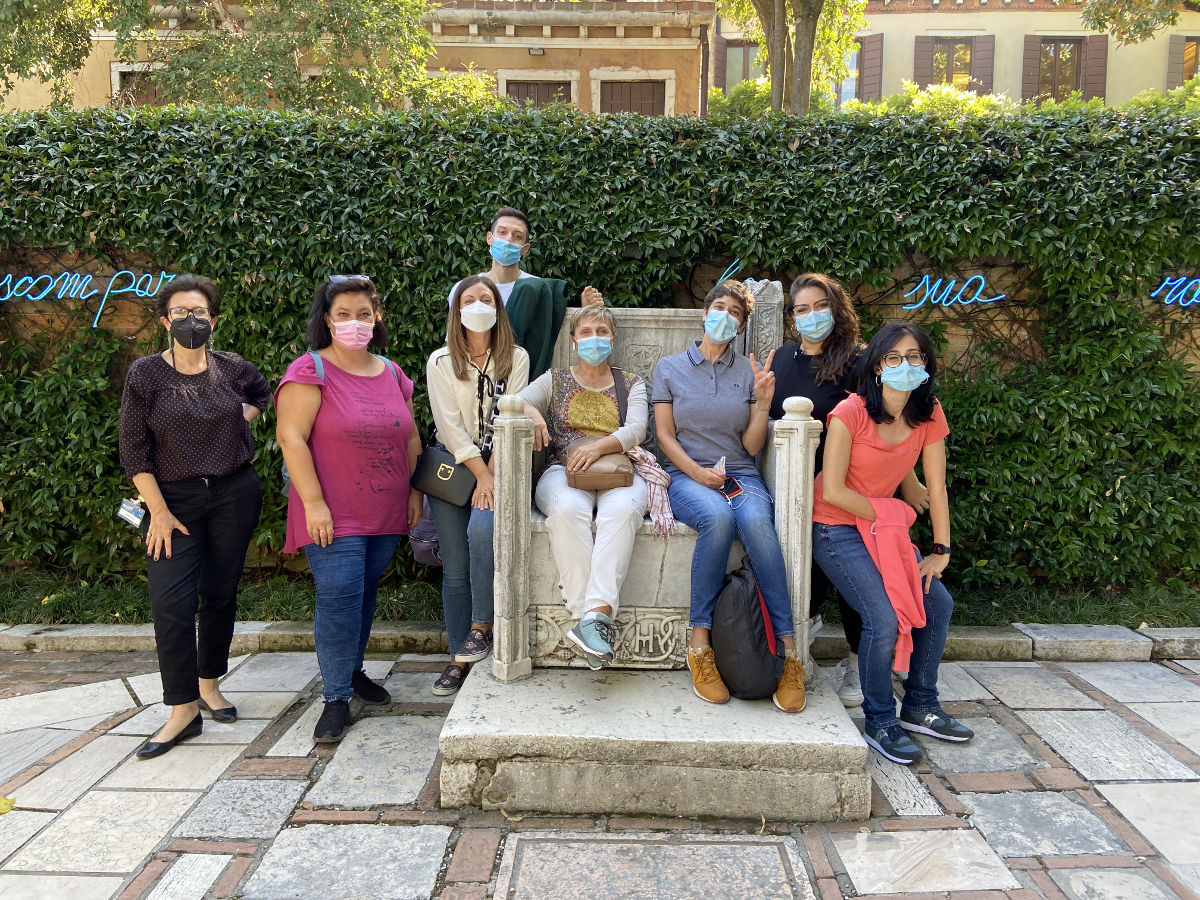 Having spent a stimulating morning surrounded by seventeenth-century works, we then progressed to the twentieth century, walking a few dozen metres to Palazzo Venier dei Leoni, which houses the Collezione Peggy Guggenheim.

We were welcomed by Dr Alexia Boro, Director of Communications and External Affairs, who offered us an interesting focus on the Collezione Guggenheim’s strong points in terms of communication and education.

We know that as early as 1980, when the collection was opened, the central focus was on young people, who were invited to get involved and make their own contribution. Today, bearing in mind the ideas held by Peggy Guggenheim, who believed that art had to speak to contemporaries, the involvement of the teenage target remains vital. This is demonstrated by the numerous internship and work experience projects the Collezione Peggy Guggenheim is involved in.

Having found common ground, the Fondazione Ducati – which for years has been offering young people the chance to gain experience through interactive educational workshops and training courses – did not fail to express its interest in the role played by young people at the museum.

Alexia Boro told us how, with lockdown, some projects led to focus groups that transformed the young people into genuine museum consultants, especially as regards communication.

Another Collezione Peggy Guggenheim project which aroused the interest of the Ducati group was the discovery of Guggenheim Intrapresae. Launched in 1992, the corporate membership project links the Venetian museum to important businesses. It is therefore both a museum and an enterprise, an aspect embodied by the Fondazione Ducati. From this point of view, it represents both an opportunity and also a source of inspiration.

What else captured our attention as regards the use of the works and the guided tours? The Easy guide audio guides. The Collezione Peggy Guggenheim has adopted a practical and effective solution to comply with visitor quotas and safety regulations: an audio guide that can be activated by QRcode and used directly from your smartphone. An easy-to-navigate interface describing the most important work in each room of Peggy Guggenheim’s house. 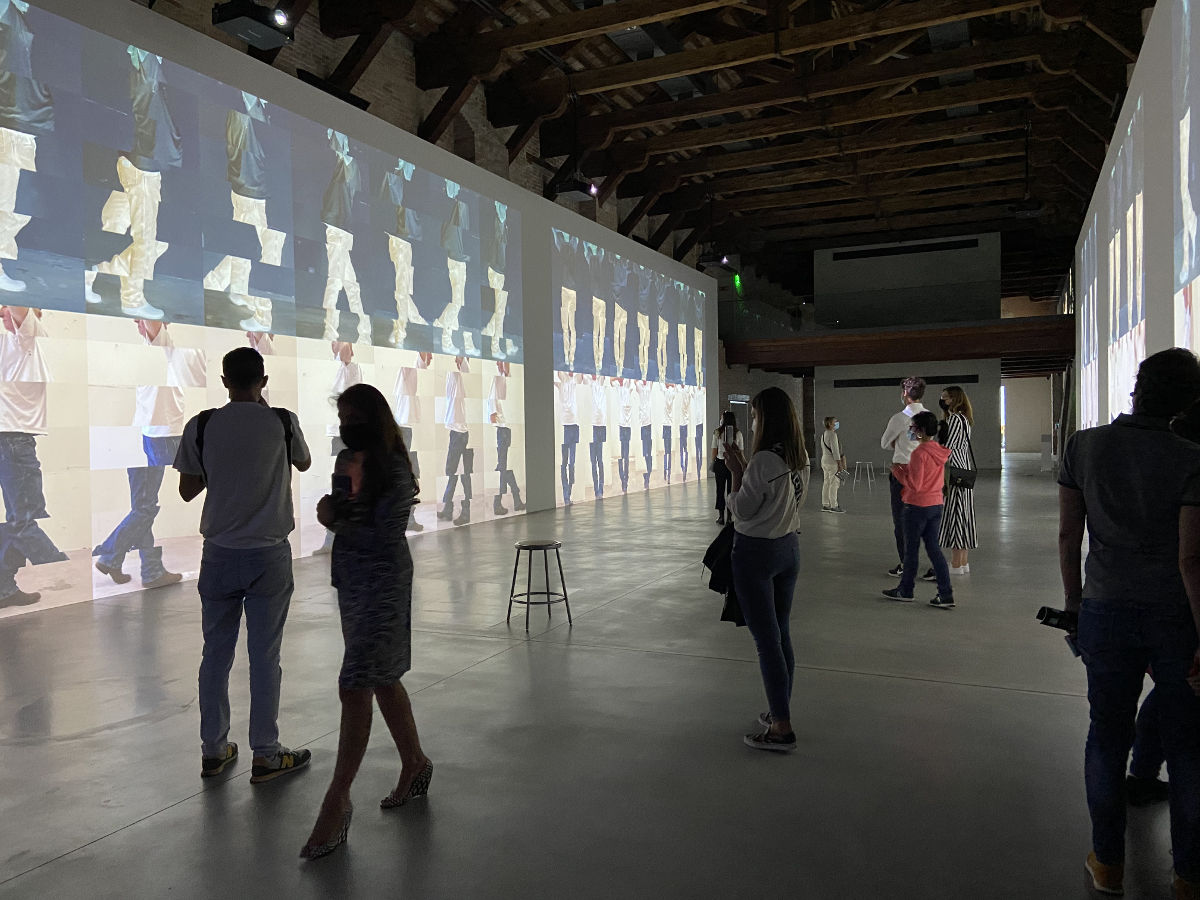 We ended our day by diving into the contemporary world of Palazzo Grassi – Punta della Dogana, where Clementina Rizzi, communications and PR manager, and Martina Malobbia, communication officer at Palazzo Grassi, accompanied us on a tour of the current exhibition and the venue designed by Tadao Ando.

Illustrating and conveying works from half a millennium ago can be difficult (from certain points of view and for certain types of target audience), but assigning the right significance on the web and on social networks to complex, digital and contemporary exhibitions such as Bruce Nauman’s is equally difficult. After a tour of the first rooms, we took a moment to talk with Clementina Rizzi and Martina Malobbia, who began by explaining the strategy adopted to communicate this exhibition.

Assuming that a major exhibition does not necessarily entail numbers, web and social media communication should not just be about getting the highest number of views, likes and followers.

They gave us the example of the Bruce Nauman: Contrapposto Studies exhibition, where digital communication, focused on pre-exhibition storytelling, led to the creation of a video interview project involving performers, musicians and artists whose work has often been influenced by Bruce Nauman. In short: engagement quality over quantity. This is a principle that BAM! deems to be essential in communication and that it seeks to convey on a daily basis.

Teenage creators in a peer-to-peer logic

Speaking of education, we found that Palazzo Grassi – Punta della Dogana is on the same wavelength as the Collezione Peggy Guggenheim: making space for young people. Not just in abstract terms, but through tangible actions too.

Palazzo Grassi has put teenagers in the spotlight with Palazzo Grassi Teens, a digital and physical engagement project that we like so much that we always include it among the case studies we bring to our audience development and digital engagement training courses, including the one held together with the Fondazione Ducati.

Palazzo Grassi Teens has culminated in a website and some social media channels designed and managed by young people for young people, with the aim of involving their peers in the world of contemporary art: a place where adolescents become both the subject and the object of the communication, acting as content creators and also recipients of the communication in a peer-to-peer logic.

The chat with Palazzo Grassi’s staff concluded with the digital strategies adopted to promote the Dorsoduro Museum Mile, which have seen the effective experimentation of Instagram Guides (a feature that has been available for over a year but has not yet been widely exploited).

The three published Guides, created as part of the social media-based “Venezia 1600. I Diari del Miglio” cultural project, feature on the Instagram profiles of the four institutions and represent three columns that talk about the founders of the network, the Venetian artists present in the network’s museums and the architectural history of the institutions. The same columns also include images shared by users via the hashtag #walkthemile1600! Take a look!

After these valuable insights, the only thing left to do was to conclude our exhibition itinerary amidst the sound and visual stimuli, immersing ourselves in the works of Bruce Nauman.

Our souvenir from Venice

What did we bring home at the end of this itinerary with the Fondazione Ducati, thanks to the welcome we received from the cultural institutions we encountered during our last day in Venice? In addition to the numerous inputs, the conviction that creating these opportunities for dialogue and swapping good practices is essential to implementing one’s own communication strategy, to broadening one’s vision and to experiencing something different from usual. And, as we hope this story shows, meetings can be stimulating even if they take place between realities and organisations that seemingly have little or nothing in common, operating in different subject areas, as was the case for the Fondazione Ducati, BAM! Strategie Culturali, Gallerie dell’Accademia, Collezione Peggy Guggenheim and Palazzo Grassi – Punta della Dogana. 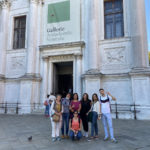 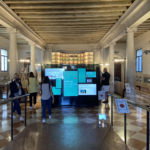 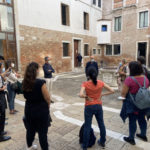 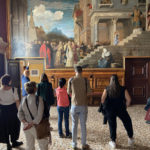 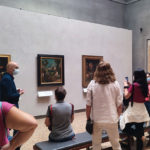 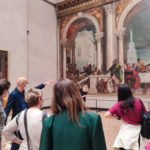 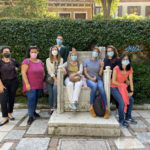 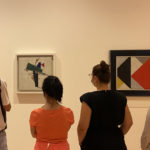 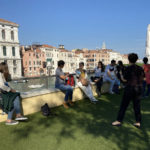 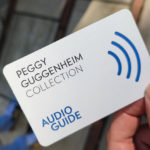 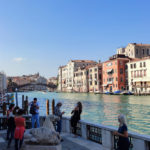 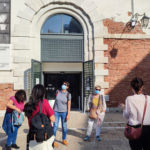 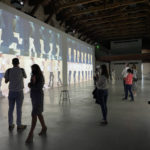 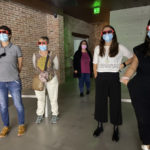 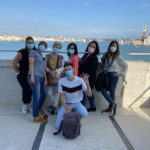