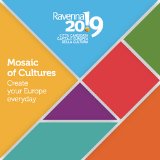 We supported the candidacy of Ravenna European Capital of Culture 2019: from the communication strategy to the dossier presentation

After the best Italian candidates in the running for European Capital of Culture 2019 had been selected, the six cities (Ravenna, Perugia, Siena, Assisi, Cagliari and Matera) had until October 2014 to reformulate the application definitively and, in the meantime, carry out regional activities.

The nomination which aspires to the title of European Capital of Culture must be made through a dossier in which it the reasons which lead to the application are explained, including through the description of the activities towards 2019 and the preparation of a program for 2019. The six remaining cities in the running for the title of Capital 2019 in Italy (Cagliari, Lecce, Matera, Perugia, Ravenna and Siena) were required to submit their Nomination File to the jury by September 5, 2014.

During this final rush, Ravenna deemed it necessary to reorganize the whole promotion and communication of its activities, not only to enhance the level of involvement of citizens, but also to communicate its proposal more effectively at international level and to the Evaluation Committee.

BAM !, as a natural follow on from the support they gave for communication strategy in the last year of nominations, was commissioned to coordinate editing and implementation of the graphic design project of the final dossier of Ravenna in 2019.

The Ravenna2019 team needed to communicate the unique story of its nomination.

BAM! was among those involved at this stage, in particular, to develop an integrated communication strategy that would express the potential of the application and would facilitate the participation of the citizens of Ravenna. The work of BAM! accompanied the application in all stages: from the Europe Party to the organization of a photographic contest, from the visit of the Evaluation Committee, until the final hearing.

BAM! worked towards the creation of a placement campaign through strategic analysis and the support of graphic execution and copywriting composition. The result was the creation of the campaign “A written application to 2000 hands” that accompanied the last months of 2013 and the communication of the shortlist selection.

BAM! tried to give continuity to the communication strategy developed for 2014, also visually reflecting the values ​​and the key points highlighted in the texts of the dossier; for example, a photo shoot was carried out specifically for the beginning of each chapter, which shed light on the spirit of participation (here’s one of the photos taken). BAM! also took on the role of coordinating the editing, identifying how to best enhance the content enclosed in the application document.