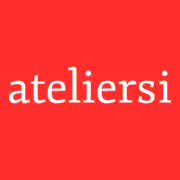 Ateliersi is an artistic production collective that has been working in the performing and theatrical arts sector since 2013. It combines artistic production with educational workshops and the running and organisation of Sì, a multidisciplinary space in the heart of Bologna, which has been devoted to theatre performances, exhibitions, artist residencies, a cafe and coworking since September 2014.

Ateliersi needed to present itself using a new tool able to promote its many different activities, the unique features of the Sì venue, local connections formed and being created, and its artistic ethos.

In order to develop a presentation able to take all these requirements into account, BAM! worked alongside Ateliersi to plan the document. The process began with an analysis, which proved fundamental for identifying the textual, graphic and photographic contents and arranging them in a coherent manner. This initial phase was followed by a study of the available data (an activity carried out by Ateliersi, focusing on current promotional tools and communications) and meetings with BAM! to discuss matters with the team and share information and ideas. Once the basic project strategy had been identified (targets, objectives and priorities of the tool to be developed), the time had come to actually produce the presentation, step by step:

This process resulted in a 46-page document, divided into a number of chapters. In terms of content, a decision was made to focus the document on five points: the collective and its productions; the “Sì” workshop; the relationship with artists; the relationship with the city and the relationship with the public. The graphic concept was developed by customising the distinctive elements of the image coordinated by Ateliersi: after choosing a number of lines that make it up, five different signs corresponding to the five points were created. This was all accompanied by just the right amount of data and images, which are better than words when it comes to painting a picture of the wealth of activities carried out by Ateliersi in its space at Via San Vitale, 69 in Bologna.

Performing Gender: the website for the second edition goes live